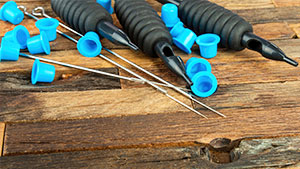 Whether you’re an aspiring artist or looking to know more about your upcoming ink session, one question any tattoo enthusiast should know is how many needles are in a tattoo gun.

In this post, we’re offering a beginner’s guide to the ins and outs of the tattoo machine known in the tattoo community as the tattoo gun. Consider this tattoo 101!

These machines are the perfect medium for the tattoo artist the various sizes and groupings of needles act much as the differently shaped paintbrush sizes work for the oil paint artist. If you don’t think those brush sizes and shapes make a difference, may I suggest watching an episode of ‘The Joy of Painting’ with Bob Ross?

How Many Needles are in a Tattoo Gun?

Basically, it depends on some factors. Based on the desired effect of the artist, various needle groupings can be used to add ink to the customer’s skin.

There can be anywhere from one to 21 needles in a needle gun, depending on the configuration of the needles. What makes the answer even more complicated is that these needles can also come in a variety of sizes.

As we mentioned before, there is a seemingly endless array of tattoo gun formats. So, how do tattoo artists keep all of them straight?

Tattoo machine manufacturers have come up with a system to describe the various sizes and shapes of needle configurations. This system uses numbers and letters to let the tattoo artist know exactly what type of configuration he’s using on his gun.

This system works as such:

An example: 0815RS. In this example, there is a set of No. 8 needles, which are about 0.25 mm in diameter, in a configuration of 15 needles, and the type of grouping is called Round Shader RS.

According to the tattoo supply company, there are a lot of variations a tattoo artist may consider for each stroke.

In terms of needle points the number of needles and the second two-digit number in the code. A technician can choose anywhere from 1 to 100 needles in any array. The website said the most common needle groupings are sets of 15, 13, 9, 7, 5, or 3.

As for the needle grouping the type of needle in the array. There are numerous common shapes, listed below, in no particular order. These can vary slightly by manufacturer, and some offer more than others:

As we mentioned above, there are five options for needle diameters: Nos. 13, 12, 10, 8, and 6. Each of these numbers corresponds to a specific size, which is listed below:

Why are needle diameters important? The diameter of a needle tip directly relates to the amount of ink that can flow through the gun and into the skin at any given time. So, a tattoo gun equipped with No. 6 needles will deliver ink a lot slower than one with a No. 13 tip.

For this reason, artists use the smaller sizes for small lines and the larger diameter needles for shading and coloring large patches of skin.

As mentioned above, tight liners describe a grouping of needles that are concentrated in a tight configuration in order to create thin lines and other delicate strokes. There are a few designations that describe variations in the format. These are:

Super Tight Round Liner RLXT: a collection of five No. 12, or 0.35mm, diameter needles in a circle or round configuration in a long taper, or point, of 6 to 7mm. Think of this as the versatile ballpoint pen in the tattoo artist’s arsenal.

Extra Super Tight Round Liner RLXP: a collection of five No. 12, or 0.35, diameter needles in an even tighter configuration. In addition, the taper of the needles is considered Super Extra Long and measures 8mm.

Flats is a term used to describe a configuration of tattoo needles that are lined. These are for shading and creating long lines and patterns. Think of this configuration as the flattened Sharpie pen in the tattoo artist’s arsenal.